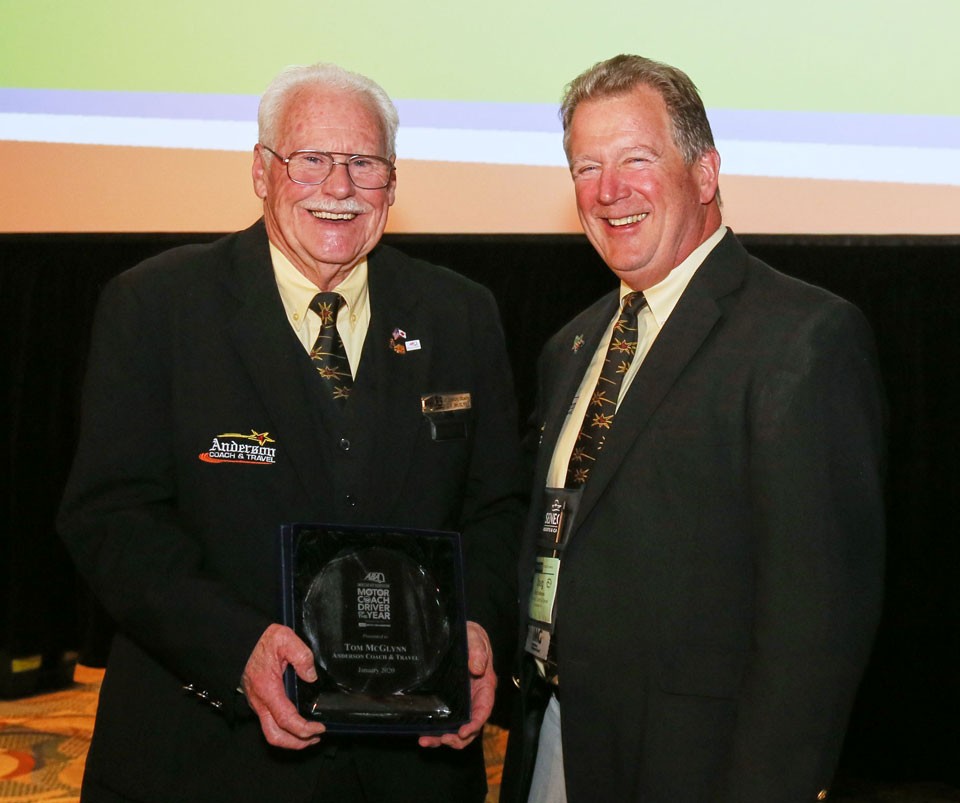 Tom “TJ” McGlynn of Hubbard, OH, was selected out of more than 70 nominees from across the country as the 2020 American Bus Association Motorcoach Driver of the Year.

McGlynn is only the second person to receive the award, which was created last year to recognize drivers who go above and beyond their duties providing safe travels to passengers across the nation. 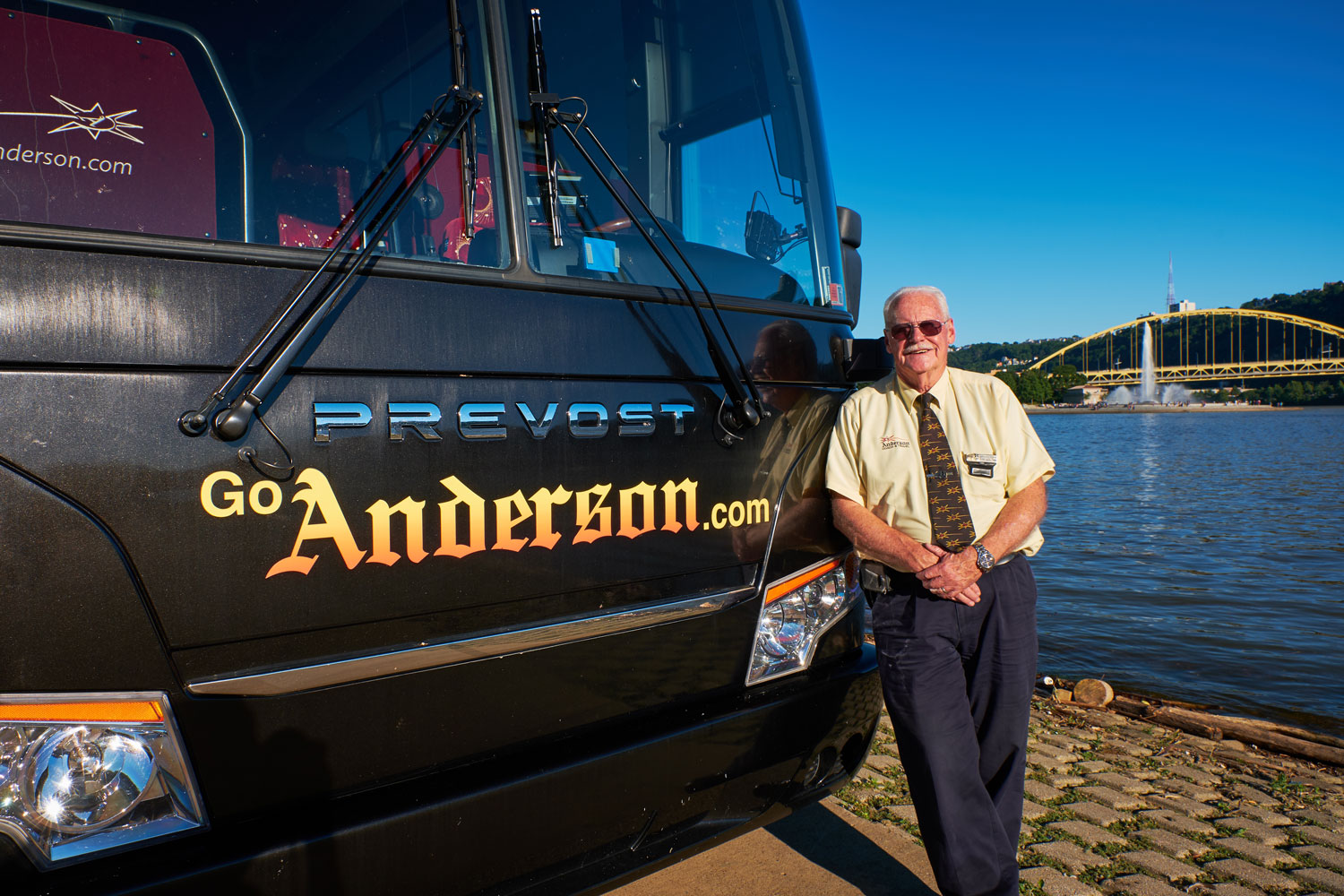 With more than 2 million miles logged, McGlynn does not have a single moving violation during his 36 years as a motorcoach operator for Anderson. Anderson Safety Manager Evan Anderson called this record “extraordinary” and noted that the company has received more than 300 requests from customers for Tom to be their driver in the last two years alone.

Company President Doug Anderson nominated McGlynn for the award due to his professionalism, dedication and extensive skills and knowledge of the industry.

“Tom has been a resource to everyone in our organization,” Anderson said. “He’s been involved with our rigorous driver training program for more than 25 years, serves as a mentor to all our operators and is a resource for dispatch, sales and operations with his wealth of knowledge.”

At the award ceremony January 12 in Omaha, NE, at the annual ABA Marketplace event, Anderson stressed Tom’s expertise and generosity. Anderson said McGlynn carries many parts with him that might be needed to fix a motorcoach with mechanical issues and he has the knowledge to execute complicated repairs. “He’s done this not only for himself, but he has also been known to assist others in the industry to get their vehicles up and operating. This is just the nature of TJ!” 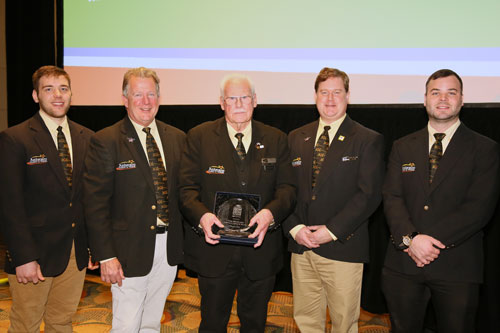 Over the decades, he’s earned every award there is at Anderson, including the prestigious Alaskan Highway Award -- twice. This award was named after an eventful 1975 tour to Alaska with our founder and O.D. Anderson behind the wheel when the coach came upon washed out roads, detours to logging trails and delays. “It’s given when drivers excel under extenuating circumstances, which Tom most certainly does,” Anderson said.

McGlynn has also been selected for the DOT Anderson award, so named in honor of founder, Dot Anderson, who was known as the company’s own “Department of Transportation.” To be selected for the award, a driver must exhibit the skills and professionalism necessary to foresee and prevent an incident that would have endangered or inconvenienced passengers or the public

Tom was also named the Pennsylvania Bus Association Driver of Distinction in 1999 and 2011.

A native of St. Cloud, Minnesota, Tom and his wife Helen live in Hubbard, OH, and have 7 children and 16 grandchildren. Tom enjoys spending time with them and is a member of Summit Volunteer Fire Department in Crawford County, as he previously lived in Conneautville, PA. 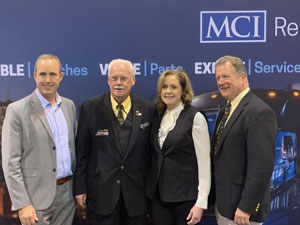 This award is sponsored by Motor Coach Industries (MCI) to honor the people who make the industry run.

“Motorcoach drivers are the face and backbone of our industry,” said ABA President & CEO Peter Pantuso. “They deliver millions of passengers safely each year to their destinations providing the utmost in customer service. They are truly the representatives of our member companies. People always remember their driver and the experience they had with them on a trip.”

The American Bus Association (ABA) is the trade organization of the intercity bus industry, with more than 1,000 motorcoach and tour company members in the United States and Canada. Its members operate charter, tour, regular route, airport express, special operations and contract services.

Founded in 1937, Anderson Coach & Travel provides a wide variety of charter services, group vacation packages, individual tours and school busing services. Visit GoAnderson.com for details on tour offerings, chartering a coach, to get your free catalog and for employment opportunities or call 1-800-345-3435 for more information.

You can see video of Tom's acceptance speech here. 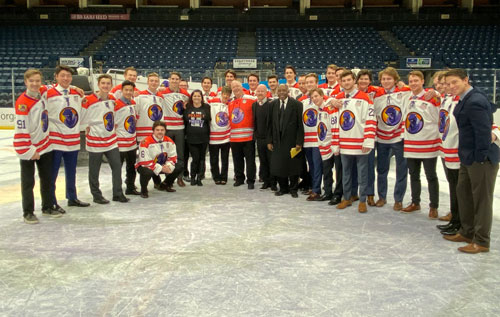 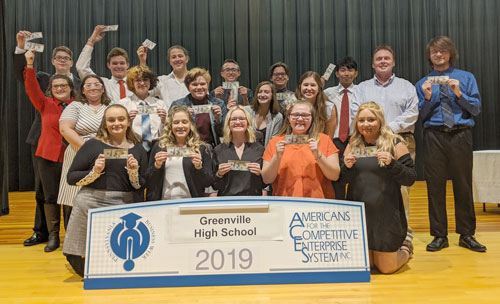 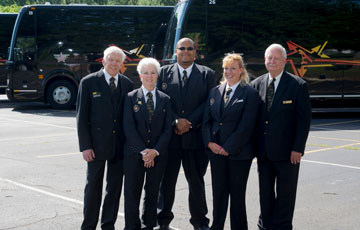